All body types are unique and beautiful, but have you ever wondered why people store fat in certain areas of their body? Some women have a tendency to gain weight around their midsection, others around their hips and thighs. We all have our “problem areas” and weight-loss issues that are based on our body type. Today Bright Side tells you which foods work best for you so you can lose weight and stay healthy.

Here’s another article that you might find helpful: https://www.precisionnutrition.com/all-about-body-type-eating

Facial bloating is most prominent in the morning upon waking up (cause you’ve been lying down → gravity), however, it can continue throughout the day

END_OF_DOCUMENT_TOKEN_TO_BE_REPLACED 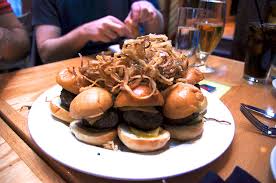 The average active adult male eats between 2,500 and 3,000 calories in a day, give or take a couple hundred. But twenty-five-year-old fitness vlogger Rob Lipsett wasn’t content with just being average at least for twenty-four hours.

He challenged himself to eat 20,000 calories in a day, and taped the whole thing for posterity in a clip titled, “EPIC Cheat Day” that has already racked up more than one million views.

Let’s start at the beginning…

END_OF_DOCUMENT_TOKEN_TO_BE_REPLACED

For decades, the food additive monosodium glutamate (better known as MSG) was demonized in the West. More recently it has been discovered to be harmless, or at least the sodium component is no worse than salt. Now, however, we’re seeing evidence the once-derided molecule could be the gateway to sticking to an intended diet.

Despite anecdotal accounts of people experiencing reactions after eating MSG-heavy meals, there is no strong evidence the flavor-enhancing amino acid is unsafe. Indeed historians have traced the widespread belief of its harms to racism, a consequence of MSG synthesis being discovered in Japan, and Americans and Europeans mostly encountering the molecule in Asian restaurants.

END_OF_DOCUMENT_TOKEN_TO_BE_REPLACED

Having problems with your food intake? Have you tried some diets but they didn’t work? Maybe the answer is to EAT LESS! If you want to eat less & eat healthier without going hungry or make drastic changes, you MUST watch this video!