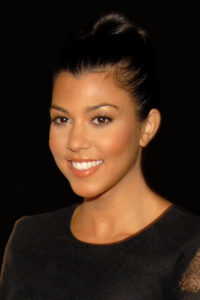 It seems that everybody wants to be a member of the Kardashian-Jenner clan. From their television show, to their social media accounts, to their makeup range, to their modeling shoots, to magazine features, to their famous spouses it’s impossible to escape this family.

Their impact on popular culture has been global, as anyone who is anyone on social media now focuses on perfectly contoured cheekbones and a peachy booty. However, now people can replicate the diet of the eldest Kardashian sister, Kourtney, as she has revealed exactly what she eats in a day.

With more than 59 million followers on Instagram and a constant stream of paparazzi following her every move, Kourtney is under constant scrutiny regarding her figure. However, despite having three children and enough money to enjoy McDonald’s every day for the rest of her life, she is still rocking a fierce and enviable body.

But she hasn’t been able to maintain a sexy physique on exercise alone, as now the reality TV legend has finally disclosed what a typical detox day looks like.

Kourtney revealed her lean and clean diet in a recent post on her app and it looks like it takes some serious self-control to stick to, as so many of our favorite foods are banned.

First, the big sis stated how she shuns most fruits and carbohydrates (bread, potatoes, cereals, pasta etc), and also steers clear of grains, beans, legumes and anything that contains dairy or gluten, according toPeople.

But the mother-of-three did reveal how fats and proteins make up the majority of her dishes. She also claimed that she starts each day with a rich and creamy avocado pudding, which she also attests to being the perfect pre-workout meal.

If you’re like me and start your day with a bowl of cocoa puffs, you may be a little unfamiliar with avocado pudding. Well, the dish basically consists of four ingredients: a whole avocado, a tablespoon of cane sugar, half a cup of whole milk and a tablespoon of manuka honey. Give the ingredients a blend and you’re ready to make your friends jealous on Instagram.

Both lunch and dinner often consist of a combination of lean proteins and vegetables, usually either fish or chicken with a side of cauliflower of broccoli.

Now, if you’re like me, I can be hungry again around two or three hours after dinner, and I’m all about a midnight snack of cheese and crackers but this is a huge no-no for Kourtney, who insists on waiting 14-16 hours after eating dinner before she has breakfast.

I’m also the sort of person who gets hungry in-between snacks, but Kourtney has a zero snacking policy except for the OCCASIONAL almond.

Then, there are the weekly fasting days (yep, she doesn’t count avocado paste as fasting), where Kourtney will only drink water and bone broth over a 24 hour period.

She explains; On fasting days, I try to stay busy and, if I’m home, I’ll avoid going into the kitchen.

So, how long could you keep up this detox diet? A week? A month? Well, Kourtney revealed how she stays on this strict detox diet for THREE MONTHS at a time! But she explained how it’s not all plain sailing:

Im not going to sugarcoat it, this detox is difficult. I also know that I need to enjoy my life, so I break the rules when I go on vacation or if there’s a special occasion.

That’s ironic, she doesn’t even coat her explanations in sugar